In December 2014, the Hayabusa2 spacecraft, designed and operated by the Japan Aerospace Exploration Agency (JAXA), was launched from Tanegashima Space Center in Japan. Its mission was, and is, to travel to the asteroid Ryugu, collect samples from the surface and interior of the asteroid and return those samples to earth. 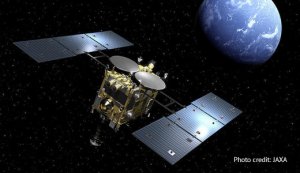 Following its successful launch, the spacecraft ventured on a three-and-a-half-year journey, reaching the orbit of Ryugu in June 2018, 180 million miles (290,000 km) away. Upon arrival, the spacecraft studied and mapped the surface of Ryugu from a distance of about 12 miles (20 km). In February 2019, the first touchdown occurred on the asteroid to collect samples directly from its surface. Five months later, a second touchdown resulted in the mission gathering material from deeper inside the asteroid. Although the surface of the asteroid has been subjected to weathering from the sun since the solar system formed, the subsurface samples are in a pristine state and expected to contain valuable material data that could tell more about the origin of the solar system. A capsule containing the samples returned to earth in December 2020. Hayabusa2 has since continued on an extended mission where it will conduct observations of exoplanets and rendezvous with another asteroid in 2031.

Mounted inside the Hayabusa2 spacecraft are 20 circuit boards used in its digital and analog cameras. The circuit boards are coated with SCS Parylene conformal coatings to protect them from the unrelenting environmental stresses of atmospheric pressure, metallic whiskers and outgassing experienced during launch, throughout the journey and during operation.

While not an issue once in space, drastic changes in atmospheric pressure during the initial launch and travel to space can have destructive effects on many coatings. Since Parylene coatings are applied as a gas in a vacuum, there are no voids in the coating for air to leach out and present pathways to failure.

While metal plating is safer than lead for the environment, the technology has become known for forming whiskers, presumably brought on by mechanical and thermal stresses. These whiskers, in turn, can cause reliability problems for electronic systems. Typically one millimeter or less, they can induce electrical arcing, short circuits, debris and contamination that can interfere with optics and electronics. While no method has been proven to guarantee the prevention of whiskers on metal plating, Parylenes have been shown to suppress the formation of metallic whiskers. Since Parylenes are truly conformal and provide uniform coating thickness on the top, sides and corners of substrates, every area of the coated product receives equal protection and suppression from metallic whiskers, crucial in spaceborne applications. SCS Parylene C and Parylene HT® have routinely been selected by manufacturers for their metallic whisker mitigation capabilities as well as their success in increasing the overall reliability of components in the aerospace industry.

Exposure to various gases can also pose a challenge for spaceborne applications. Known in the industry as outgassing, gases released from materials can cover delicate electronics and lead to degradation and eventual failure. As a result, spaceborne coatings must not only protect the substrate but must avoid inadvertently damaging other instruments and components. In short, coatings used should be those classified as low outgassing materials.

Determination of a material’s suitability for operation in space was undertaken by the Jet Propulsion Laboratory in the United States with the results published at outgassing.nasa.gov. To be considered a low outgassing material, test results must meet two criteria: a maximum total mass loss (TML) of 1.0 percent and maximum-collected volatile condensable material (CVCM) of 0.10 percent. Parylene C, Parylene C with a proprietary adhesion promotion system (AdPro Plus®, AdPro Poly®) and Parylene HT were tested and fell well under the stated limits, confirming their use as low outgassing materials.

SCS is proud to have been selected to provide Parylene conformal coatings to the Hayabusa2 space mission and to play a role in the study of the asteroid Ryugu. Low outgassing Parylenes can benefit your application’s mission by protecting components through atmospheric pressure changes while also suppressing metallic whiskers due to its robust properties and benefits. In addition, ultra-lightweight, uniform and pinhole-free Parylene coatings provide excellent barrier properties to deliver maximum performance in the most unforgiving environments. To learn more about Parylene conformal coatings and how they can protect your aeronautical or astronautical components, contact Tim Seifert at 317.244.1200, ext. 0220, or tseifert@scscoatings.com.

MORE FROM THIS ISSUE: